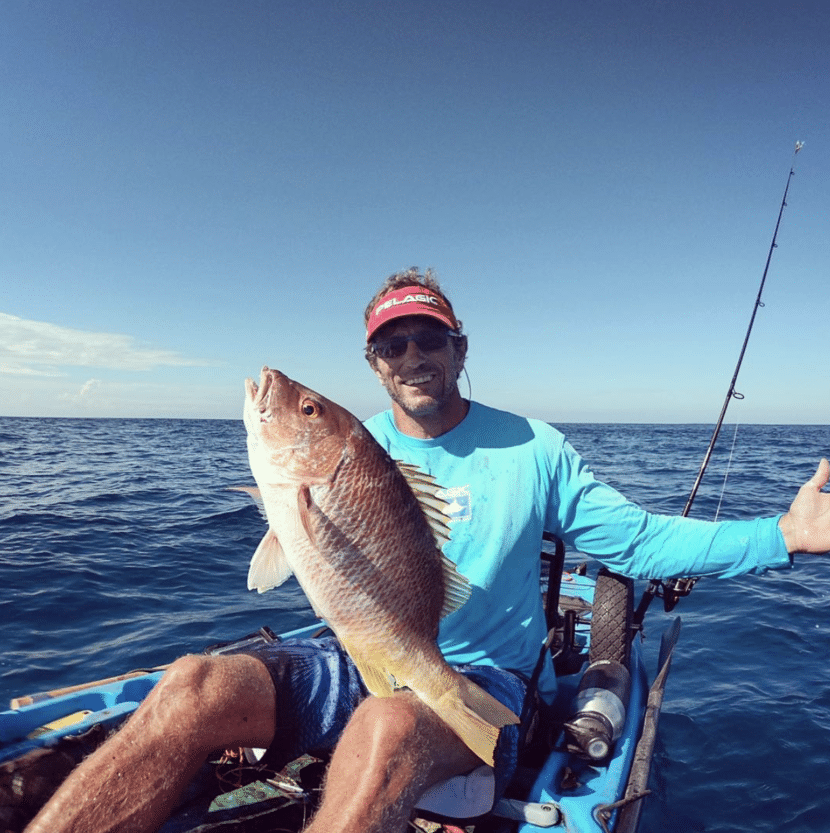 Out alone at sea in his small Hobie kayak Lance Clinton is King of Jaco Bay. Nobody can touch what this former Seattle stockbroker does in Costa Rica’s largest beach town. He’s a one-man wrecking crew armed with a fishing pole and a GoPro camera. Needless to say he loves the fight. “One of my favorite aspects of catching fish from a kayak is the adrenaline rush. Here I am in this tiny little plastic canoe so when you get a couple of miles from shore and find yourself hooked up to a 100-pound fish — you can’t help but get excited,” said Clinton. “Things get kind of wild and there is nobody else around. It’s just you, the Pacific Ocean and the fish — and you are each trying to impose your will upon the other. It always makes for a very visceral experience. It nourishes that primitive part of the mind that I call the ‘Lizard Brain.’

Not even a Goliath Grouper – bigger than his kayak — could escape Clinton’s wrath down off the jagged rocks of Jaco’s south end last year. He wrestled and corralled that huge fish up against his kayak, took some photos and a video (Seen below) before releasing the behemoth to meander off into the dark sea to live another day.“I’ve been fortunate enough to catch some good fish over the years, some of which are almost certainly world record fish for kayak/line class. My largest to date is a 400-pound Goliath Grouper that I caught on a 1-oz. tube jig and a 5500 spinning reel … that was interesting,” Clinton fondly remembered. “It turned into an hour-and-a-half war that I was quite surprised to have won. I can still remember what it felt like to reach out and put my hand on that beast. I was completely exhausted and I figure that fish was older than me so I cut him loose and let him go home. It was one of those experiences that I’m glad to have had but I’m in no hurry to repeat it!”

That’s Clinton personal record as far as size and weight goes. But he’s caught them all and has hundreds of amazing photos to prove it. Some of Clinton’s fish photos appear exaggerated and out-of-proportion, but this guy catches really big fish – red snappers, roosterfish, dorado or mahi mahi, grouper, yellow fin tuna, wahoo, cubera, mackerel, barracuda, jacks and snook – all right there in Jaco Bay – sharks, too. On his kayak he’s the captain, the navigator, the first mate and it’s just him against the Pacific Ocean – storms, huge waves, high winds and currents. His weapon of choice is only that fishing pole. He’s been dragged from one end of Jaco Bay to the other and far out to sea by large fish that eventually wear themselves out surrendering to Clinton. “I’m not a sport fisherman,” he says. “I enjoy going out and catching my dinner … it brings an overwhelming sense of emotion.”
I
n early February, Lance released his best video to date — “Find Your Connection: A Kayak Fisherman’s Story,”( Seen below) which is simply one of the very best and most exciting two–minute videos ever to come out of Jaco Beach. “To me this is about way more than catching fish. I feel a sense of oneness out here, something that’s gettin’hard to find,” Clinton said in his video introduction. “It’s so easy these days to get mired down in a world with ten-thousand things, out here though I feel connected with everything around me. I mean you take a kayak out in God’s big blue room you better be doing some harmony with your surroundings. This is where the wild things are. This is the Pacific Ocean … Not everybody is going to paddle a kayak out into the ocean. But I think everyone can experience this kind of connection with the world. I found my way now get out there are find yours.” (A link is provided below to this thrilling YouTube video and others.)

This 48-year-old Louisiana native grew up fishing, hunting and loving that Cajun lifestyle. In his late 20s Lance was a stockbroker for Prudential Securities in Seattle where for the first time in his life he realized his life was all wrong for him so he took action. “I used to get on the elevator every morning with a sense of dread in my stomach,” Lance remembered. “Dreading the chore of living my life the way I had constructed it … my life was shit.” Twenty years ago Lance took a vacation from city life and decided on surfing in Costa Rica. Having arrived at the San Jose airport Lance made his way to the closest beach with surf – Playa Jaco – and Clinton’s life changed. “I knew the moment that I pulled into the tiny (at the time) beach town that I was home,” Lance said. “I don’t know if it was the ocean, or the surf or just a sense of peace that I felt when I arrived, but I knew I wanted to stay … I found myself in a place and living a life that I really loved. For the first time I could see my defects for what they were. I realized that the only thing keeping me from a beautiful life was ME! That’s really where my life began right there on Jaco Beach.”

Clinton — in his own words — sums up what kayak fishing really means to him. “One of the most beautiful things — that has come into my life — as a result of that change has been my kayak fishing. I actually remember exactly how the obsession began. I was walking on the beach one day and I saw a guy that had just caught a mackerel from shore. I saw how excited he was and thought ‘Man, what is wrong with me? I live right in front of the Pacific Ocean and I don’t even fish!’ That very day I went to the tackle shop and bought a cheap rod and reel and a few lures for fishing from shore. The story could have ended right there if it wasn’t for a bit of luck. On one of my first trips to the beach with my new gear I managed to land a beautiful Red Snapper and that was all she wrote. I was so stoked with the feeling of coming home with my dinner. Years and countless fish later, I still get that same feeling every time I come home from a successful fishing trip.“From there I quickly became enamored with the idea of fishing from a kayak. As a lifelong surfer, I was completely comfortable with the idea of paddling out on a small boat. I was also excited because I knew that it would allow me to get to where the fish were without having to buy an actual boat. I am a minimalist by nature and hate the idea of having too much ‘stuff.’ The idea of having a big expensive boat to take care of makes my head spin. With a kayak though I can keep things simple but still get the experience I want. No gas bill, no mechanic bill, just a little self-generated horsepower and I can go wherever I want. “I can sneak in close in shallow water to areas that the bigger boats can’t access. I can also move in near silence, giving me a better chance of ‘sneaking up’ on skittish fish. I also get tons of exercise and keep myself in good physical condition as a byproduct of my hobby.”

About four years ago Lance decided to go professional with his kayak obsession which has led to him receiving sponsorships from Spyderco Knives, Yo-Zuri lures, Pelagic Gear Clothing and numerous others. Lance’s day job is designing top-of-the-line filet knives along with hunting and pocket knives. Knives are an integral part of fishing and cleaning fish for eating. Clinton has used his kayak experiences to design a line of knives for Spyderco. “Since early childhood I have been fascinated with all things shiny and sharp,” says Clinton. “A knife lover and aficionado to the core … I began several years ago and have now developed a number of my own models, most of which are geared towards fishing, camping and outdoor use.” The “Lance Clinton Waterway” signature outdoor knife — produced by Spyderco — will be hitting store shelves in a few months.

Lance stresses that through his use of social media comprised of Instagram and Facebook along with producing videos of his version of ‘extreme kayak fishing’ that he has a strong message for those unhappy with their lives — looking for a better way to live. “Life is short, life is beautiful. Be good to yourself and to those around you. Stop repeating broken behaviors and learn new and productive ones. At all costs, find a way to spend your life doing things that you love. This dream is not out of reach for anyone but it often requires a huge reassessment of priorities, thoughts and behaviors. Above all, I want to encourage everyone to make those investments because the result is a life well lived.”